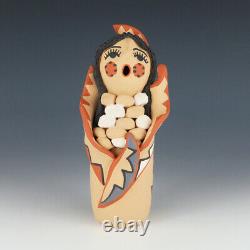 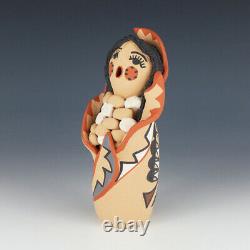 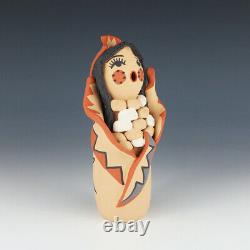 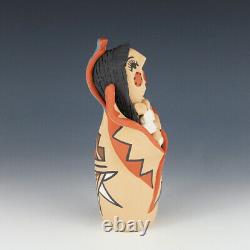 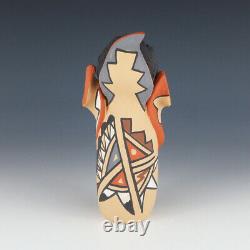 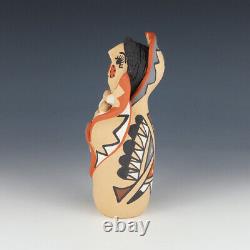 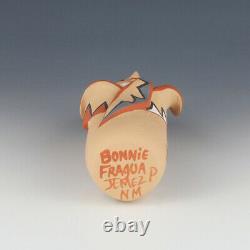 The Corn Maiden is an important figure in Pueblo culture, bringing a good harvest to feed the people. Bonnie was born into Jemez Pueblo in March of 1966. She has been making pottery since she was eight years old, learning from her mother, Grace Loretto.

She specializes in storytellers of different sorts. She digs her clay on the lands of Jemez Reservation, uses natural slips, and fires her pottery outdoors.

6 tall x 2 3/4 long x 2 3/8. Within the Jemez Pueblo there are many exceptional potters. The work is generally characterized by the buff and red clays used, and the range of styles and subjects.

Storyteller, figures, sgrafitto designs, wedding vases, and melon pots are a few of their favorites. Before the arrival of the Spanish, Jemez was known for its traditional black-on-white ware, but production of this type of pottery died out in the early 18th century. There was a revival of Jemez pottery-making in the early 20th century inspired and influenced by Zia pottery designs, but it was not until the 1960s and 70s that a significant number of Jemez potters began producing high-quality work using traditional methods. The item "NATIVE AMERICAN JEMEZ POTTERY CORN MAIDEN BY BONNIE FRAGUA" is in sale since Saturday, January 2, 2021.