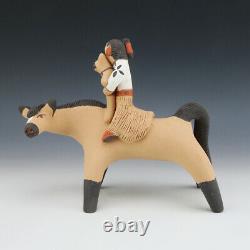 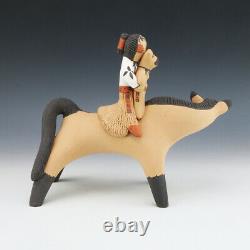 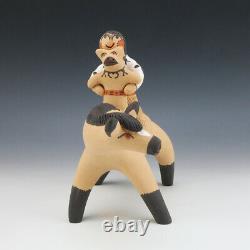 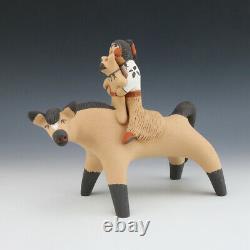 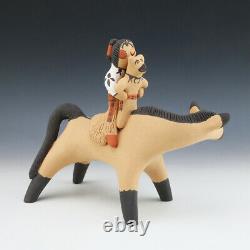 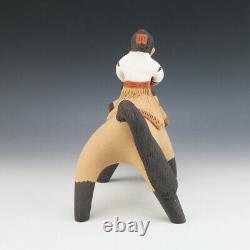 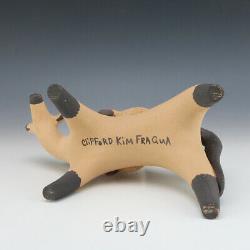 JEMEZ POTTERY HORSE STORYTELLER BY CLIFFORD KIM FRAGUA. Jemez potter Clifford Kim Fragua hand crafted this outstanding pottery storyteller, which depicts a horse carrying two children. Clifford was born at Jemez Pueblo in 1957. He has been creating pottery sculptures since 1970. He was inspired to learn the art of clay sculpting from his mother, the late Grace L.

Natural pigments are also used to paint each piece. The clay and sand is prepared by drying, grinding, and sifting before it is mixed with water to produce the medium (weight of clay). The sculptures are then hand pinched, air dried, painted, and fired. His work is a unique blend of the traditional and contemporary styles, producing one of a kind pieces. 6 1/4 tall x 7 3/4 long x 3 3/4.

The pottery is new but hand made and painted, so there may be imperfections. Within the Jemez Pueblo there are many exceptional potters. The work is generally characterized by the buff and red clays used, and the range of styles and subjects. Storyteller, figures, sgrafitto designs, wedding vases, and melon pots are a few of their favorites. Before the arrival of the Spanish, Jemez was known for its traditional black-on-white ware, but production of this type of pottery died out in the early 18th century.

There was a revival of Jemez pottery-making in the early 20th century inspired and influenced by Zia pottery designs, but it was not until the 1960s and 70s that a significant number of Jemez potters began producing high-quality work using traditional methods. The item "NATIVE AMERICAN JEMEZ POTTERY HORSE STORYTELLER BY CLIFFORD KIM FRAGUA" is in sale since Sunday, December 19, 2021. This item is in the category "Collectibles\Cultures & Ethnicities\Native American\ US\1935-Now\Pottery". The seller is "crowandcactus" and is located in Santa Fe, New Mexico.