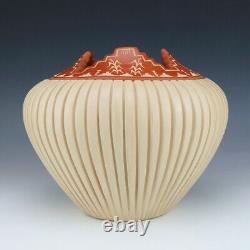 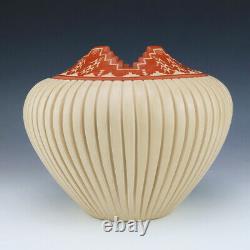 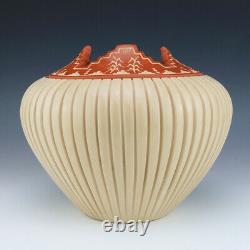 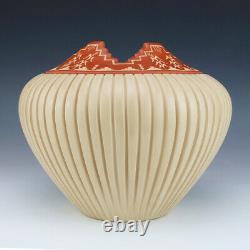 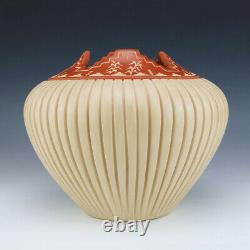 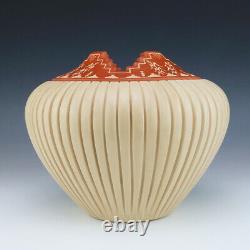 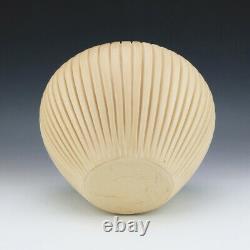 JEMEZ POTTERY VASE BY ALVINA YEPA. This exquisite vase was handmade by Alvina Yepa from Jemez Pueblo. Alvina is of the Sun Clan and has been a potter since 1982.

She was taught traditional pottery making by her mother, Felipita Yepa. Alvina is known for her stone polished redware jars, melon bowls and large incised ollas. She has won many awards, including Best of Division, at the Santa Fe Indian Market, the Heard Museum Show, and the Inter-tribal Indian Ceremonial in Gallup. 6 7/8 tall x 8 3/4? The pottery is new but hand made and painted, so there may be imperfections.

Within the Jemez Pueblo there are many exceptional potters. The work is generally characterized by the buff and red clays used, and the range of styles and subjects. Storyteller, figures, sgrafitto designs, wedding vases, and melon pots are a few of their favorites. Before the arrival of the Spanish, Jemez was known for its traditional black-on-white ware, but production of this type of pottery died out in the early 18th century. There was a revival of Jemez pottery-making in the early 20th century inspired and influenced by Zia pottery designs, but it was not until the 1960's and 70's that a significant number of Jemez potters began producing high-quality work using traditional methods.