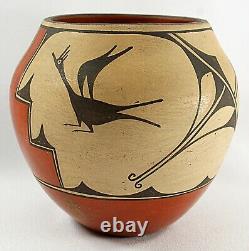 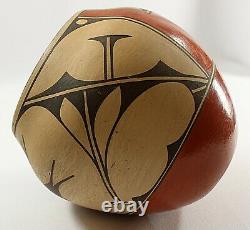 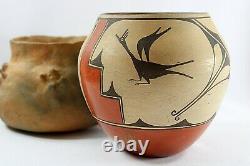 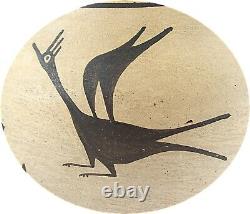 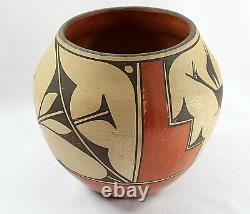 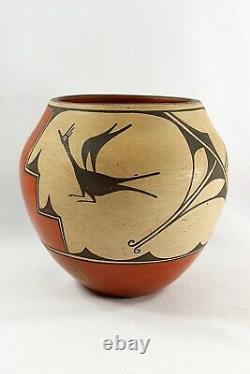 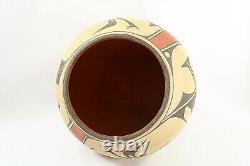 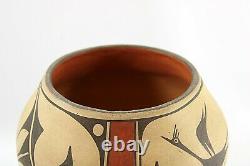 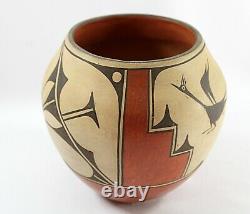 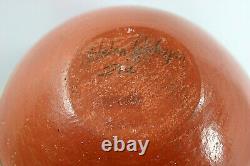 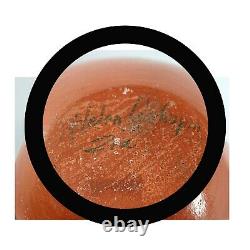 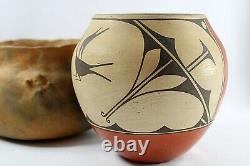 Helen Gachupin made her handsome pottery from the 1950's into the 1980's. Helen was born in 1932 and lived in San Ysidro, New Mexico, at the Zia Pueblo with her mother, potter Andrea Toribio Gachupin, and her father Jose Gachupin, along with her 3 brothers and her sister Gloria (married name Chinana), who became a potter as well. Famed Zia potter Rosalie Medina Toribio was their grandmother; she also lived in San Ysidro and passed away in 1950 at the age of 91, so it's possible her granddaughters watched her making pottery, but they learned their craft from their mother. Helen died, unmarried and childless, in 1992. In 1979, pottery by Helen and Gloria was in the "One Space/Three Visions" exhibit at the Albuquerque Museum.

In 2015, a pot of hers was chosen to represent Zia pottery at an exhibition of Native American pottery at the The Mitchell Museum of the American Indian in Evanston, Illinois. Collections at the Heard Museum in Phoenix, the Maxwell Museum of Anthropology in Albuquerque and the Peabody Museum of Archaeology and Ethnology in Cambridge, Massachusetts include examples of Helen's pottery. This stone-polished olla is classic, traditional Zia polychrome pottery in red and black on cream slip and red slipped interior. The roadrunner, the most prominent motif in Zia pottery, is framed by a stepped design and a stylized black bird with widespread wings and curled feet, a somewhat unusual design that is identical on both sides.

It's signed on the bottom Helen Gachupin Zia. The pottery piece stands 7 inches tall and 7 inches across, with a 22 inch circumference and a 2 1/4 inch base.

It weighs 2 pounds 9 ounces and is in excellent condition, with the following caveats: rubbing on the red paint of upper step design (pictured) and one area of pitting beneath that to the lower right on the red painted underbody section, also pictured. There are no chips, cracks or hairlines. Helen Gachupin was not as prolific a potter as her relatives, so consequently her pieces are uncommon and desirable. The item "Native American Vintage Zia Olla Pueblo Pottery By Helen Gachupin" is in sale since Tuesday, May 11, 2021. This item is in the category "Collectibles\Cultures & Ethnicities\Native American\ US\1935-Now\Pottery". The seller is "primpingyourhome" and is located in Ormond Beach, Florida. This item can be shipped to United States.