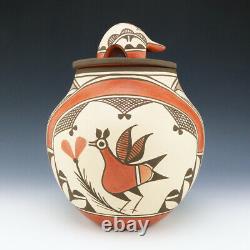 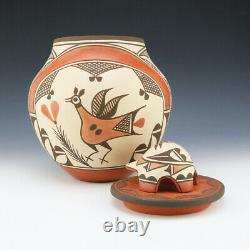 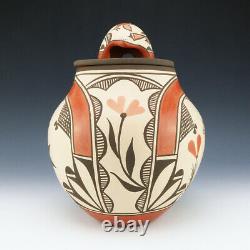 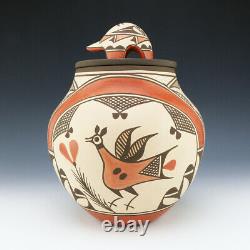 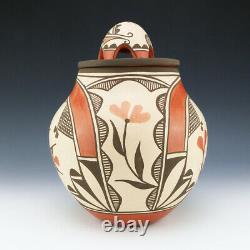 ZIA POTTERY JAR BY ELIZABETH MEDINA. This truly breathtaking pottery jar by Elizabeth Medina showcases her talent as master potter of Zia Pueblo. Elizabeth gathers and processes the natural clay, as well as, vegetable and mineral paints. She also uses traditional methods in creating this hand coiled jar and firing it. Originally from Jemez, Elizabeth has lived in Zia Pueblo since 1978, and learned the art of traditional pottery-making from her mother-in-law, Sofia Medina. A unique addition to any pottery or Native American art collection.

9 5/8 tall x 7 5/8 long x 7 5/8 wide. Zia is a small Pueblo located about 35 miles north of Albuquerque on a site overlooking the Jemez River. The Zia are well known to the people of New Mexico for their sun symbol, which depicts a circle with line emerging at the four cardinal directions. The symbol appears on the state flag and is the official New Mexico State insignia, adopted as an emblem of friendship among cultures.

Artists of Zia are known for producing beautiful traditional work, especially their handmade pottery. Their redware and polychrome pottery often features designs painted in brown or black and the bird motif that is a signature element of Zia pottery.