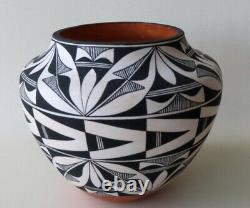 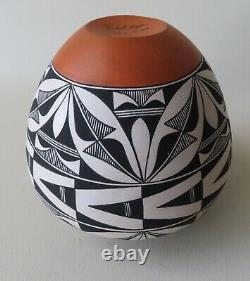 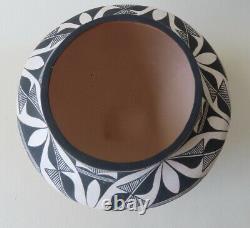 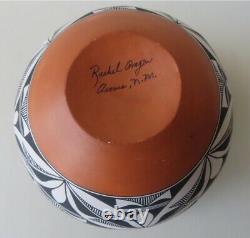 Decorated with traditional designs in black and red on white. Aragon, Acoma, NM on bottom. Provenance: From a Scottsdale Estate.

1938 has long been considered one of the finest traditionalist potters from Acoma. She is a daughter of Lupe Aragon and a sister of Florence Aragon and Mary Trujillo. She learned to make pottery from her mother and has continued to make classic shaped vessels with intricately painted designs. She has won numerous awards for her pottery at Santa Fe Indian Market, Gallup Ceremonials and other events. Pueblo pottery is made using a coiled technique that came into northern Arizona and New Mexico from the south, some 1500 years ago.

In the four-corners region of the US, nineteen pueblos and villages have historically produced pottery. Although each of these pueblos use similar traditional methods of coiling, shaping, finishing and firing, the pottery from each is distinctive. Various clays gathered from each pueblo's local sources produce pottery colors that range from buff to earthy yellows, oranges, and reds, as well as black. Fired pots are sometimes left plain and other times decorated-most frequently with paint and occasionally with appliqué.

Painted designs vary from pueblo to pueblo, yet share an ancient iconography based on abstract representations of clouds, rain, feathers, birds, plants, animals and other natural world features. Tempering materials and paints, also from natural sources, contribute further to the distinctiveness of each pueblo's pottery. Some paints are derived from plants, others from minerals. Before firing, potters in some pueblos apply a light colored slip to their pottery, which creates a bright background for painted designs or simply a lighter color plain ware vessel.

Designs are painted on before firing, traditionally with a brush fashioned from yucca fiber. Different combinations of paint color, clay color, and slips are characteristic of different pueblos. Among them are black on cream, black on buff, black on red, dark brown and dark red on white (as found in Zuni pottery), matte red on red, and polychrome-a number of natural colors on one vessel (most typically associated with Hopi).