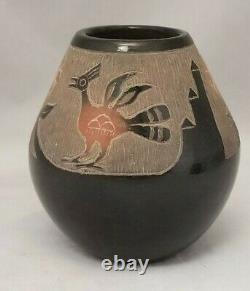 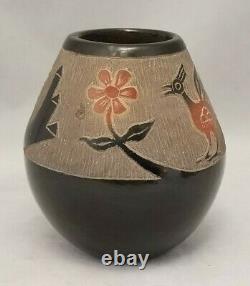 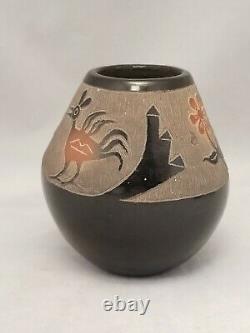 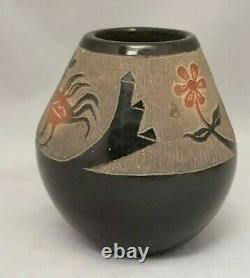 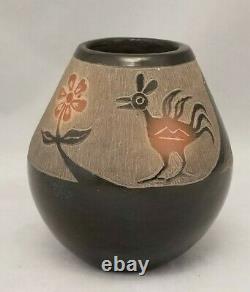 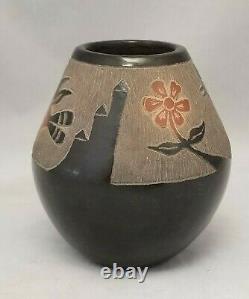 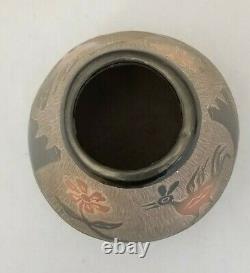 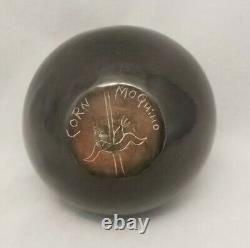 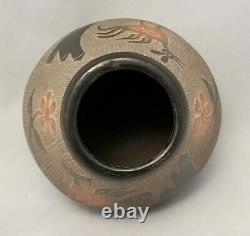 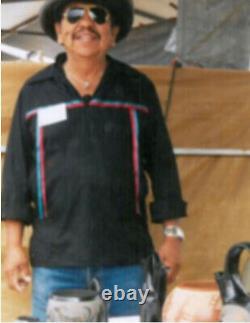 Upon winning, if you want an invoice with your options and actual cost, please message us and request it. If you absolutely want the method you chose, please immediately message us to let us know. In many cases, our cost comes out lower than the quoted price. More often than not, it is much less than quoted.

This lovely black & red. And measures approximately 5" high x 4" wide. The design is in fantastic and masterfully carved with some minor marks to the pot (refer to pics).

Artist Corn Moquino was one of the earlier Santa Clara Pueblo potters to employ sgraffito style carving. He married into Santa Clara Pueblo and has been making Santa Clara style pottery since around 1963. Artist Corn Moquino was of Zia and Hopi heritage. He was the son of Benina Moquino; husband of Christine Herrera; brother of Willie Moquino, Bod Moquino, Reyes Homer and Ester Talles; Father of James, Christopher, Mark, Marvin, Melvin, Martin, Berncie, Matthew and Michael Moquino all of whom are potters. Reference: Pueblo Indian Pottery: 750 Artist Biographies by Gregory Schaaf.

Corn Moquino, 87, a resident of Santa Clara Pueblo passed away on December 14, 2016. Corn was born on October 26, 1929 in Zia Pueblo, New Mexico. He was preceded in death by his parents Augustine Moquino and Benina Shije; brothers- Willie, Ignacio and Lee Moquino, sisters- Reyes Homer and Lucy Antone and Son James Moquino.

Corn lived and extraordinary life. Having survived the forced removal from his family as a child by the United States Government in an attempt to assimilate Native Children during the boarding school era. At the age of 12 he escaped boarding school and became a sheep herder and ranch hand. Through his teen years he traveled to many parts of the United States and discovered new talents and careers along the way.

Corn was most proud of his years he spent singing with Hank Williams Sr. And many other western singers who are now legends. In the early 1960s Corn met the love of his life, Christine and relocated to Santa Clara Pueblo. It was then that he became intrigued with black Santa Clara pottery- he became a self-taught potter. He is one of the earliest potters to employ sgraffito style carving. Corn quickly developed a passion for creating beautiful works of art and through the years evolved into a master. Corn presented pots at the venerable Sid Deutsch Gallery in New York City. Corn received numerous awards, recognitions, prizes and ribbons from various prestigious exhibitions such as the Santa Fe Indian Market, Eight Northern Indian Pueblo Council arts and craft show, New Mexico State Fair, Gallup Ceremonial, Phoenix Heard Museum Indian Market and countless other shows and art expos throughout the United Sates. Corn was a Jokester and brought a smile to everyone he met. He loved his family and shared his gifts, stories and talents with anyone who was willing to listen and learn.

He had an immeasurable love for the Lord and his Holy Word, he spent countless hours studying and interpreting sacred scripture. Corn will be greatly missed by all who had the privilege of knowing him his passing leaves a void in our hearts. Corn is the name you will never forget. You will always remember me every time youre eating corn. Corn is sweet, nice and always smiling.

If you are a collector of Native American Pottery, Jewelry, Kachinas, baskets, and hard-to-find items, please put us in your favorites so you can be notified of our new items as we list them. Please check out our other auctions both under RAINDANCERAUCTIONS and LCBERGH. Please consider the pictures, therefore, 90% of the description.

We do our best to document our items accurately. The only reason we will accept a return is if we misrepresent an item by accident. This is our #1 priority. If there is a hallmark, I will do my best to identify the artist. The item "Santa Clara Pueblo Pottery CORN MOQUINO 3 x 3" is in sale since Saturday, May 1, 2021.

This item is in the category "Collectibles\Cultures & Ethnicities\Native American\ US\1935-Now\Pottery". The seller is "lcbergh" and is located in Florence, Oregon. This item can be shipped to United States.