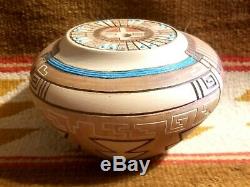 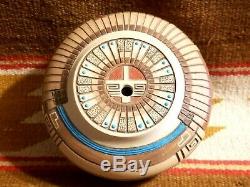 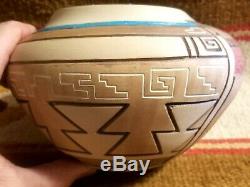 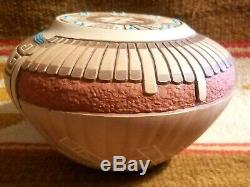 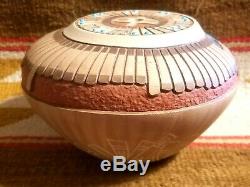 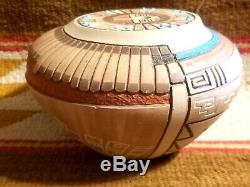 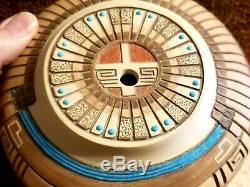 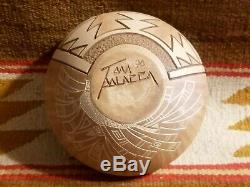 This older piece is fabulous larger Seed Pot made by the outstanding artisan Tom Polacca. Of the Hopi Pueblo of. These " Museum Quality" pieces by him are so scarce, much desired, highly collectible, and this one is just.

Terrific as it may be one of a kind. This carved Seed Pot shows the classic style developed but Tom over the years. But as an innovator in pottery design, this piece comes with an almost Turquoise Necklace design and turquoise Feather Seeds around the top circle. Great classic Hopi Geometric designs with stacking arrows and traditional Hopi Geometric Symbols...

It is 4.5" tall and 6.5" across in diameter. Its the only pot of his that I have found in what research I have done, that offers his Turquoise Inlay on a pot, to the public. Its a rare piece indeed. It is in perfect condition with no chips cracks repairs or damage.

The piece is Carved signed Tom Polacca in his classic " Signature Series" coined phrase, due to the carved name vs the painted name on the bottom of pots. Supposedly, only the carved name pieces were the " Museum Quality " pieces he put out according to documented statements by Tom. The piece is also dated 1990.

There were a couple available at the high-end shops in Santa Fe. One larger piece at 3300.00, and the others, mostly jars, at 1600.00 - 2500.00. None with Turquoise and no other seed pots. Its a scarce sweet piece and if you want a one of a kind piece from a historic pottery Artisan, this is it, great addition to any collection! Tom Polacca is the son of Fannie Nampeyo, and grandson of famed Hopi potter, Nampeyo.

Tom has been producing pottery since 1955 and has become a Master Potter on his own, much like his Mother and Grandmother. Tom's innovative self developed style is reflected in his relief designs. He, like his grandmother, has developed a new approach to Hopi pottery. He has skillfully blended traditional elements with a contemporary style. He formed pottery in the traditional coil method.

The basic vessel was slipped in an apparent rag-wiped light tan slip revealing various shades of the color. The design was carved into the clay using a variety of techniquesdeep carving for the outlines, shallow carving for details, and incising for highlights.

He then used basic vegetable and mineral paints in rust, brown and tan colors as his palette. Once in a while a piece is produced that is special to Tom.

These pieces he calls his "museum quality" pieces, and they are distinguishable from the others because on these, and only on these , he will engrave his signature into the bottom. You might even say these are. This is one of those. Every detail has been elaborately etched into the pottery surface. He has meticulously made sure that nothing was overlooked, from the delicately ribbed feathers style around the rim, to those around the base.

Tom had recently taken his designs to a new level with additional depth and color. The designs come alive and seem to leap right from the pottery surface. Tom worked hard developing the process that made him famous - one source even referring to Tom as the patriarch of Hopi Pottery. Tom has been featured in many books and magazines which focus primarily on elite Indian arts. He is mentioned in several prominent works on Hopi pottery, including.

Hopi-Tewa Pottery: 500 Artist Biographies. The Art of the Hopi. By Jerry and Lois Jacka. Fourteen Families in Pueblo Pottery.

By Rick Dillingham, and many others. Thomas received wide acclaim for his pottery over the years and his work is in numerous museums such as the Heard, the Denver Art Museum and others.