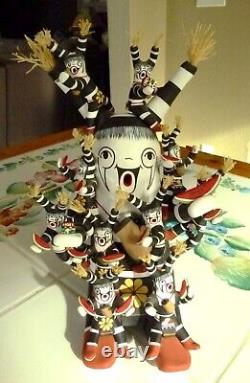 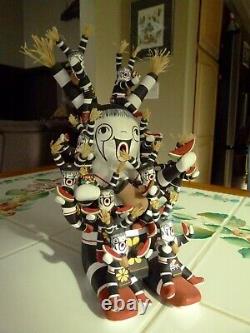 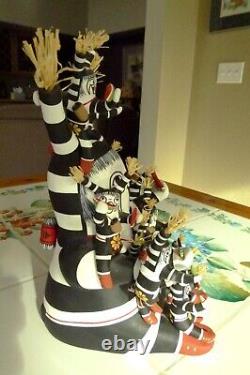 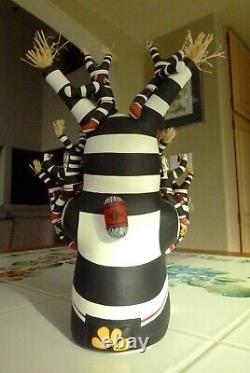 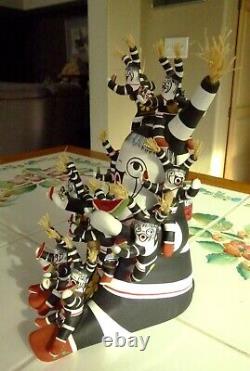 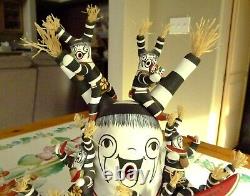 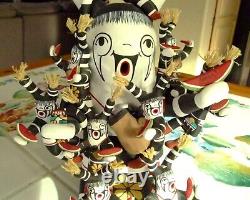 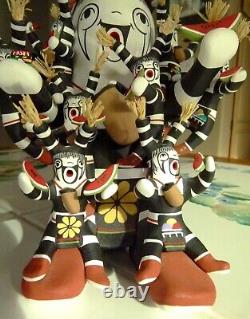 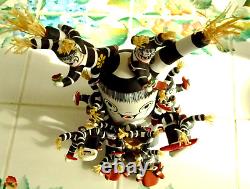 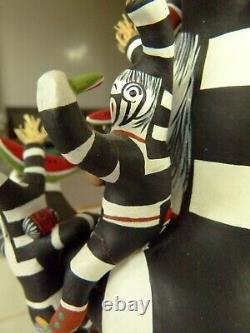 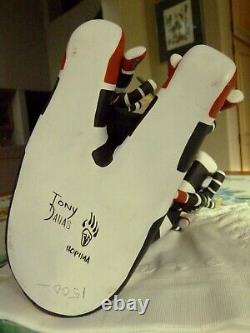 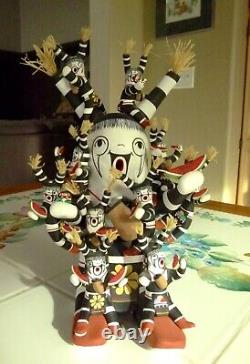 They sit in different precarious positions, with eyes in various directions, all with watermelon slices in hand. This sculpture is interesting and beautiful viewed from any angle, which certainly makes for an exciting and charming piece for the storyteller collector! The Clown has a complex ceremonial role - the Koshare clown imparts wisdom and advice but also pokes fun at unacceptable behavior. The Watermelon Clown represents gluttony, always overdoing it, whether he taunts dancers, gets the children to behave during ceremonies, or comments on Hopi behavior.

One of the top clowns on this sculpture looks sheepishly over one shoulder with slice of watermelon in the other hand, looking as if he is in the process of throwing it to the ground and destroying it, a game often seen by the clowns. Notice of Repair: Watermelon Figure on Arm at Top right has been Reglued. This repair is difficult to notice on display. Please view photographs as integral to the description of this vintage item and to evaluate its condition for yourself. You get the exact item pictured. Tony Dallas is a master potter of storytellers from the Hopi tribe. He is full-blooded Native American Indian, born in 1956 into the Hopi Reservation. He married into the Cochiti Pueblo in the early 1980s. From an early age, Tony Dallas was inspired to learn the art of working with clay sculptures by observing his mother-in-law, Lucy R. Tony began seriously making pottery in 1982, practicing all the ancient traditional methods of constructing pottery and clay sculptures. His passion morphed into creating storytellers, which Tony endowed with his own creative genius. He stated, I started to hand coil a regular storyteller. Then, I thought for a moment - Mudheads and Koshare clowns also tell stories and they are so humorous to me. So I began experimenting with different styles of storytellers using my creative imagination to construct them. Tony Dallas' style is a finely painted contemporary flare on a traditional sculpture. This item is in the category "Collectibles\Cultures & Ethnicities\Native American: US\1935-Now\Pottery". The seller is "infohwy" and is located in this country: US. This item can be shipped to United States.